Welcome to week two of The Screen Addict. Things are really going to get rolling this week, and we’ll start off with a new viewing diary. You’ll notice this is much smaller than the one I led with last week, but this is probably what a more normal installment is going to look like. (I don’t watch dozens of movies every week, fortunately/unfortunately.) As was the case before, I’ll look at both new releases and other miscellaneous stuff I’ve watched in the past week. This may be the only blog post you’ll ever read that discusses both Transcendence and a direct-to-video production of Jesus Christ Superstar.

Everything about Transcendence sounds promising in theory. It’s the directorial debut of Wally Pfister, who for years has gained a great deal of respect as Christopher Nolan’s cinematographer. Like most Nolan films, it deals with potentially heady themes like our increasing dependence on technology. Unlike most Nolan films, it tackles these themes in precisely the least heady way possible. This is a shockingly stupid movie that pummels its message into the minds of the audience and never stops to wonder if its argument is the least bit convincing. The central premise is intriguing: a world-famous scientist (Johnny Depp) attempts to upload his mind before his body meets its end, and those he left behind attempt to wrestle with the implications of this creation. However, there’s not a lot of wrestling going on in the minds of the characters. Depp’s wife Evelyn (Rebecca Hall) decides she will follow every order her now-computerized husband gives, while his best friend Max (Paul Bettany) immediately thinks it’s dangerous and tries to convince Evelyn to shut it down.

Things just get sillier from there, as Evelyn sets up shop in the middle of the desert and helps create a gigantic compound where Depp-bot very quickly takes technology to absurd and dangerous places. Meanwhile, a group of young, good-looking anti-tech terrorists led by Kate Mara plot to take down the compound. These terrorists are initially the obvious villains of the piece, but in the second half we are suddenly supposed to sympathize with their cause, despite the fact we just saw them murder dozens of innocent people. It’s an attempt at ambiguity that fails completely, in part because the plot simply makes too many logical leaps that the audience just isn’t willing to go along with. On top of that, Transcendence is also a terribly dull film, and by the time any action kicks in we’ve long ago stopped caring or taking it seriously. 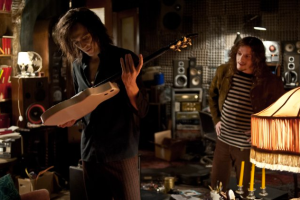 Jim Jarmusch’s Only Lovers Left Alive is familiar in that it is about vampires, but unfamiliar in just about every other respect. His vampires are not the young lovers you see in other movies, but instead they have the feel of elderly artists who find themselves increasingly at odds with the modern world. For the most part, they don’t look terribly old. Our protagonists are played by Tom Hiddleston and Tilda Swinton, whose characters are named Adam and Eve, respectively. They live a life of purposeful isolation, and Adam in particular seems angry at what humans (or “zombies”) have turned the world into. Human blood has been contaminated, and vampires rely on getting the “good stuff” from various special connections. They no longer drink directly from humans, because, as one of them puts it, “this is the 21st century.”

To a degree, Jarmusch’s film is about the 21st century, at least insofar as it explores what life must be like for a group of immortals who have lived since the 1500s. In many ways, the surrounding world does not care about their existence, and you get the sense that you are watching a strange, unique species die away. That may make the film sound more purposeful than it is, since Only Lovers Left Alive is first and foremost an aimless hang out movie. The vast majority of our time is spent simply watching these vampires exist, though that changes slightly when Eve’s sister Ava (Mia Wasikowska) comes to town. From there they are forced to adapt to changing circumstances, but even then there is never a hint of real conflict in their relationship. Perhaps more than any other couple in fiction, Adam and Even are truly meant to be together forever.

Last week I talked about my experience with Lars von Trier’s Nymphomaniac, which I found fascinating but ultimately unrewarding. Only this past weekend did I finally get around to seeing his classic Breaking the Waves, and I was surprised by how many of the same themes it tackles, and much, much better. This film is every bit as brutal as many of his modern creations, but there’s an authenticity to the proceedings that I think is missing from what he’s doing today. In Nymphomaniac, you often get the sense that he’s joking, and that’s not the von Trier I’m particularly interested in. Breaking the Waves is different in that it feels like an exploration of love and faith that he poured the entirety of his being into, and it features a truly special performance from Emily Watson as the protagonist.

Among many thing, Breaking the Waves has a masterful feel for its Scottish location. The ocean is in the background of nearly every outdoor shot, and the film somehow remains beautiful despite the grittiness of von Trier’s pre-Dogme photography. (His only attempts at intentional visual beauty come at the start of each “chapter.”) The style works because it is so immersive, planting the audience in the middle of a Calvinist community that is initially disturbed by the marriage of Watson’s Bess to the outsider Jan (Stellan Skarsgård), and then even more rattled by Bess’ actions after her husband is injured in an oil rig accident. What follows is devastating, but ultimately beautiful, and it all leads up to a truly unpredictable final shot that somehow feels wholly appropriate.

For whatever reason, as a younger person I was obsessed with this musical. Obsessed, I say. Not only did I own the original 1973 film starring Ted Neely, but I also had a VHS of this curiosity; a straight-to-video production starring nobody of note that all takes place more or less on one cheap-looking set. I may revisit the 1973 film in the next week because I have a lot of free time, but in the meantime there’s this, which I revisited in its entirety on YouTube. Once you get past the laughable opening credits sequence, what follows is essentially a filmed stage production of the musical, which is done in a style that puts the followers of Jesus in leather jackets and camo tank tops and the Romans in blatant Nazi garb. This is a universe where painting “Jesus is Cool” on the wall is seen as a dangerous act of rebellion.

Any production of Jesus Christ Superstar lives and dies by who is playing Judas, and here is portrayed rather poorly by Jerome Pradon, who shouts more than he sings and looks like a combination of Quentin Tarantino and Rob Corddry. He’s awful good at providing amusing “screw this” reaction shots during scenes of the apostles praising Jesus, but outside of that he doesn’t have a whole lot going for him. Really, this is a Jesus musical where Jesus actually doesn’t have that much to do outside of the big Gethsemane number. This Jesus Christ Superstar has a lot going for it–I found its version of “Trial Before Pilate” surprisingly, and effectively, intense–but then Judas shows back up to unconvincingly sing “Superstar” and things go right back downhill. Anyway, if you’re curious to hear how the ’70s film holds up, tune in next week.