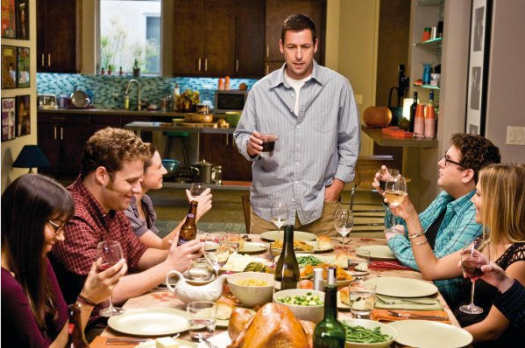 Ones on 1 is a monthly feature in which I write about a selected film that reached number one at the box office for precisely one weekend. This month, we examine the film that took the crown on August 2, 2009: Funny People.

Five years removed from its theatrical run, it seems particularly insane that a film like Judd Apatow’s Funny People was given a wide release. It’s hard to even recall a recent independent movie that has aimed for the same kind of specific, rambling ambition. There may not be another movie like it, and that is both to its credit and detriment. It isn’t terribly unique on a micro level, but when looking at the big picture—and all the bits, conflicts and ideas it throws into its 146-minute stew—it reveals just how strange and admirable this whole undertaking was. This could only be made by someone who had already reached the top of the mountain, and by the time Funny People came out, Apatow was on an unparalleled roll. This film ended that roll, but it clearly wasn’t for lack of trying. END_OF_DOCUMENT_TOKEN_TO_BE_REPLACED

This week on The Screen Addict: The frustrating chilliness of Bennett Miller’s Foxcatcher, going bigger and better with Interstellar, the beginning of The Hunger Games’ end, an exciting piece of James Bond news, and more. END_OF_DOCUMENT_TOKEN_TO_BE_REPLACED

This week on The Screen Addict: Jon Stewart puts on a serious face for the big screen, Michael Keaton puts on a show in Birdman, and yes, I’m also listening to that podcast everyone else is. Read on for all that and more. END_OF_DOCUMENT_TOKEN_TO_BE_REPLACED

So, this is the dilemma. When I rebooted my blog as “The Screen Addict” a few months back, I basically did it as a self-inflicted kick in the butt. I had stopped writing regularly, and I thought starting over might provide the appropriate motivation. Well, it did. For a while. Then various factors converged, including a busy stretch of work and non-work stuff, and there was also the very basic problem that when I got home from work, the last thing I wanted to do was get back on a computer and keep dealing with words. So, once again, I find myself changing what this blog is going to be. The goal is this: once, in the middle of (almost) every week, there will be one of these posts. I might write other stuff in between, and I plan to resume Ones on 1 in December, but this is more or less going to be it.