This week we’ve got a slightly smaller Viewing Diary, with the only two new releases being The Amazing Spider-Man 2 and a third viewing of The Grand Budapest Hotel. Those entries will be shorter than usual, since I wrote about the former yesterday and I plan to post something Wes Anderson related later this week or next. I was able to take a look at two classic films this week, with a second viewing of the Coen brothers’ first film, and my belated introduction to Arthur Penn’s Bonnie and Clyde. 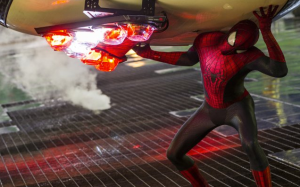 I wrote at some length about this film after I saw it yesterday, so I’m not going to go much further. However, I will mention one more dumb thing: every single action sequence in this movie seemed to include a cheering section for the New York locals. Whenever Spider-Man does battle with a foe, there seems to be a large group of fans rooting him on, despite the fact that there’s an obviously violent super villain right there. It’s most inexplicable in a late scene when a child wanders away from his mother and right into extreme danger. Then the mother acts all shocked and afraid, as if it wasn’t her decision to stick around and watch the carnage show with her son anyway. Ugh, these movies. 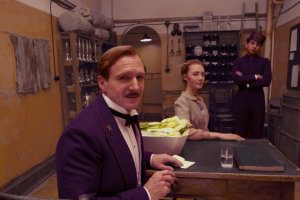 Third viewing. The goal is to have a post up later this week on my long and tumultuous relationship with the films of Wes Anderson, so I won’t go deep on it here. Just know that this might be the early leader for my favorite film of the year, with Under the Skin and Blue Ruin close behind. This is just a hilarious, relentlessly entertaining and sneakily devastating piece of work, much like the very best of Anderson’s output. Between this and Moonrise Kingdom, we may be watching a filmmaker enter the most assured period of his career. As meticulous as Anderson’s films have always been, there’s a certain shagginess to his earlier work that seems to have disappeared. Every scene, every action and every line in The Grand Budapest Hotel is absolutely essential to the overall package, and it’s so thrilling in the moment that it’s hard to appreciate the big picture until it’s all over.

This is a film that I have been meaning to watch for literally five or six years, and finally this past week I took the leap. Not to go too far out on a limb, but it’s pretty terrific. It’s easy to see why many see this film as the beginning of the new Hollywood era. It may have been made in the 60s, but its New Wave-esque style and frank depictions of violence and sex feel straight out of the 1970s. If it were released today, it’d likely be a very tame R, perhaps even a PG-13. In the late ’60s, it initially shocked and appalled the cinematic world, with its primary champion being one Roger Ebert. It’s one of the most influential and important films for a movie buff to see, but that makes it sound more like homework than it is. Bonnie and Clyde is first and foremost a wonderfully entertaining sit, and the ending still leaves a significant mark to this day.

This viewing was slightly influenced by last week’s release of the phenomenal Blue Ruin, since many aptly noted the influence of the Coen brothers on that film. In particular, it often reminded me of Blood Simple, which similarly follows characters utterly unprepared for the murderous tale they’ve stumbled into. I remember quite liking this movie when I first watched it a few years back, but this time around I absolutely loved it. In many ways, this is the perfect example of what a “first film” can and should be. It’s simple, but it’s a fantastic showcase for all that the Coens would do well once their career got rolling. This is a dark, funny, brilliantly plotted Texas noir that trumpeted the arrival of a new, just about fully-formed cinematic voice. For some reason the Coens don’t seem particularly fond of Blood Simple these days (the DVD release featured a director’s cut that actually removed several minutes of footage) but perhaps that’s just what happens when veterans look back on their earliest work. For those of us that didn’t actually make the thing, it remains a masterful debut.