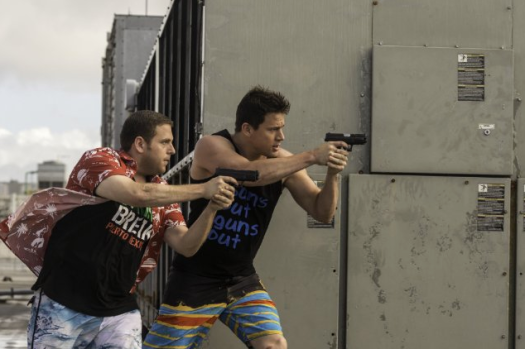 There are two major factors driving the sudden and unlikely success of Phil Lord and Christopher Miller in the world of comedy. The first, and most important, is that their movies are funny. Really funny. The second factor is their ability to turn the inherent silliness of their projects into virtues rather than hindrances. In particular, their last three movies, 21 Jump Street, The LEGO Movie, and now the sequel 22 Jump Street, are ostensibly cynical projects conceived out of creative laziness or pure commercialism. Instead of turning their back to such notions, Lord and Miller have attacked them head on, via self-referential jokes and an uncanny ability to weave them into the very themes of their films. 21 Jump Street worked not because it simply poked fun at its own existence, but also because it became a film about nostalgia and attempting to relive the past. If anything, 22 Jump Street doubles down on the self-awareness, and in the process becomes a comedy sequel about comedy sequels.

However, just because a movie knows it’s a comedy sequel doesn’t entirely excuse it from committing the same sins of those that have come before. Most comedy sequels don’t work because the element of surprise is gone, and all that’s usually left is a lame attempt at trying the same thing and hoping the magic never left. (For instance, The Hangover Part II.) Part of 21 Jump Street’s success was that absolutely nobody saw it coming, and now with this sequel audiences will inevitably have higher expectations. Lord and Miller are smart to get out in front of the sequel problem, and they address it in smart and funny fashion, but ultimately it’s still just an excuse. When all that is gone, they still have to deliver a funny movie, and once it gets down to business 22 Jump Street is often just as relentlessly entertaining as its predecessor. The surprise is gone, but the jokes still hit with impressive consistency.

As the film is sure to remind you several dozen times, 22 Jump Street covers much of the same ground as the original film. Only now instead of high school, they infiltrate the local college looking to track down the supplier of a drug called “WHYPHY.” In the first film, it was Schmidt (Jonah Hill) who got in with the “cool” crowd, but this time around Jenko (Channing Tatum) joins a fraternity and becomes a star on the football team while Schmidt feels left out. The lone significant twist on the original’s formula comes when one of our heroes makes a mistake that puts him on the bad side of Ice Cube’s Captain Dickson. It’s a simple enough joke, but the actors make it sing. The film also makes good use of several new supporting players. Amber Stevens plays Schmidt’s love interest this time around, while Wyatt Russell is the quarterback who acts as Jenko’s introduction to bro-hood. However, it’s Jillian Bell who leaves the greatest impact as a seemingly minor character who becomes much more important later. To reveal just what makes her performance so perfect would spoil the fun.

One could talk about the meta stuff all day, but the biggest reason for this series’ success is almost certainly the insanely good comedic chemistry between Hill and Tatum. Out of nowhere, they’ve created two of the better comedy characters in recent years, and their relationship has a sincerity to it that, even when played for laughs, they feel like fully-realized characters and not cogs in some larger comedy machine. Even the gay jokes, perhaps inevitable in a dude-driven comedy like this, don’t feel particularly panicky. In fact, there’s even a moment when the film tries to push back against such notions. The humor in the Jump Street films is certainly dumb and crude, but it’s deployed with intelligence, craft, and is primarily driven by character.

And then there is Lord and Miller’s direction, which is as crucial to the film’s success as anything. Unlike most modern comedy directors, they allow their direction to contribute to the comedy rather than just watch it unfold before the camera. Sound, music, editing and camera movement are all used to great effect, and while their visual aesthetic could still use some polishing, it’s exciting to think about what they could be doing several years down the line. They already have a unique, just about fully formed comedic voice, and they’re able to take just about any property and make it their own. Despite the vast differences in subject matter and MPAA rating, it’s quite clear that the Jump Street films and The LEGO Movie both come from the same place.

The whole formula works so well this second time that it’s easy to imagine they might try it again a couple years down the line. Perhaps they will, but 22 Jump Street’s brilliant end credits sequence both suggests that it probably won’t happen, and if it did it probably would be a really stupid idea. Though in the careers of Phil Lord and Christopher Miller, stupid ideas seem to be about par for the course. It’s about time we start listening to some of their good ones.