It’s been a busy week of movie-watching for me, so that can only mean one thing: time to bring out the old Viewing Diary! This time around, we looks at the new releases Lucy, Magic in the Moonlight, A Most Wanted Man and Wish I Was Here. On the oldies side, I finally get around to Alfred Hitchcock’s World War II journalism thriller Foreign Correspondent. Good times all around! So let’s take some random Taiwanese drugs, start using 100 percent of our brains, and get to work. 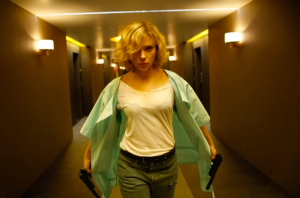 When the reviews for Luc Besson’s Lucy started pouring in, the film actually got quite a bit of praise for its monumentally crazy final act. And crazy it is, but while some found the ambition of the film’s finale admirable, I kind of wish the film reigned in its big ideas just a little bit. As a pure action film, it’s actually kind of fun, and Scarlett Johansson continues her winning streak with another magnificent performance, but despite the film’s best attempts to mean something in the home stretch it actually adds up to a whole lot of nothing. This is a film that is way too dumb to be smart, and the problems with Lucy go all the way down to the basic premise. Essentially, Johansson’s title character is a student in Taipei who gets caught up in a drug deal, and then has a whole package of a new illegal substance inserted in her stomach that she is meant to take up to Europe. When that package starts to leak, she becomes super intelligent, and not just your average kind of super intelligent. She becomes so intelligent that she is able to control other people and objects around her, and she continues to evolve to the point that… well, I’d best not spoil that. But it’s absurd.

The film is also built on the idea that most humans only use this 10 percent of their brains. This conceit has been well-mocked on Twitter and elsewhere, but it’s a bit distressing how firmly Lucy sticks to those guns. Pile that on top of the premise that a drug meant to be used recreationally gives her all these powers just because it leaks into her bloodstream, and there you find my “suspension of disbelief” breaking point. I’ve been thinking about why I’m unable to go with the silliness in this film while I’ll happily accept the logic of other science fiction premises, and I think its because the premise of Lucy is pretty much all there is to the plot. This “science” is not a story delivery system as much as it is the story. This is a perfectly exciting action film at times, but it’s built on a foundation of… let’s call it “bovine excrement.”

Woody Allen’s insistence on making one film a year certainly indicates a preference for quantity over quality, and that has never been more apparent than with the release of Magic in the Moonlight, a film so indifferently made that to call it half-baked would be an insult to half-baked things. I’m equally surprised by my hatred of this film as anyone, since I thought last year’s Allen film Blue Jasmine was terrific, and by and large I have enjoyed many of this decade’s European-set efforts. (Heck, I was the only person on Earth who liked To Rome with Love.) However, Magic in the Moonlight just felt utterly phony and pointless from start to finish. The characters seem unmotivated, the performances incredibly stilted, and it has the kind of plot where nothing—and I mean nothing—will happen for 20 minutes and then Allen chooses to drastically lurch his characters on to the next thing. This film looks fantastic, the premise is fine, and there are occasional moments of wit. However, any moments of joy or insight are few and far between, and the result is a truly boring and useless film. I’m all for a minor Allen movie so long as it’s pleasant, but this thing is so minor that projecting it on a big screen feels like a waste of precious electricity. 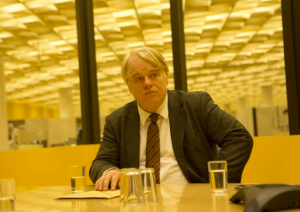 As I am normally a huge fan of slow-burn espionage thrillers set in cloudy European locales, it should surprise nobody that I loved A Most Wanted Man. The last non­-Hunger Games film completed by Philip Seymour Hoffman before his death (ugh), this John le Carré adaptation allows him to turn in one last masterful performance. Here he plays Günther, a German intelligence officer in Hamburg who is tasked with keeping an eye on Chechen immigrant/possible terrorist Issa Karpov (Grigoriy Dobrygin). Günther wants to watch Issa and see how he can be used to land bigger targets, while most of his superiors want Issa off the street as soon as possible. This is a deliberately paced film without a single onscreen death, but director Anton Corbijn (The American) is fantastic at creating an atmosphere of silent paranoia. And then the ending comes, and the film reveals itself to be a two-hour set up for one massive punch to the gut. A Most Wanted Man fools you into thinking everything is under control, but that turns out to be merely an illusion. 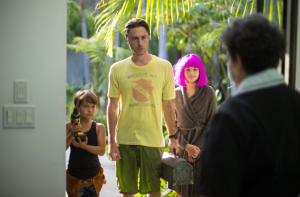 Zach Braff’s second directorial effort Wish I Was Here is a movie that looks great, is well performed, has some funny moments, and yet rings false far more often than not. It’s not due to a lack of sincerity—if anything, Braff’s writing and direction are too sincere. This is a well-intentioned film that feels like it was written completely from the heart without ever taking a second to see what the brain had to say. He doesn’t earn audience reactions as much as he simply tells them what their reaction should be. For instance, a character is introduced with the world’s largest Dick Cheney picture hanging behind his desk, so we know we are supposed to dislike him right off the bat. This film is also structured like an overcrowded episode of television, with a few extraneous subplots that are conveniently cleaned up by the end. (The arc involving Braff’s brother, played by Josh Gad, is especially pointless.) Really, anything involving the word “plot” is where this film gets into trouble. Braff works so hard to manufacture feelings that he never thinks about what the story has to do to root them in some sort of reality.

This is not a film most people will think about when they hear the name “Alfred Hitchcock,” and justifiably so. It’s nowhere near his best movies, but that’s admittedly a rather unfair comparison. Top-level Hitchcock is filmmaking of an unparalleled level. Foreign Correspondent, however, deserves a place right near the top of his second tier. Besides being a thrilling film with all the famous touches you’d see in movies like North by Northwest, it also acts as a look back at a specific place and time. This is a movie that directly addresses the dawn of World War II, and it’s interesting to watch the well-publicized tug-of-war play out between Hitchcock’s desire to make an entertaining movie and his producer’s desire to keep things topical. Ultimately, it’s able to find a very nice balance, even though the ending feels a bit tacked on. Much of Foreign Correspondent is able to keep its subtext buried deep, but when Joel McCrea starts sermonizing about keeping America’s “lights burning” to the blaring tune of “The Star-Spangled Banner,” it feels just a bit out of place. This wouldn’t be the last over-obvious final scene of Hitchcock’s career, of course. Here’s looking at you, Psycho!