Throughout most of his career, Tom Cruise has made his film decisions based on one thing: to where will audiences follow him? For a while, the answer to that question was “pretty much anywhere.” However, in the last decade or so, a slight tension seems to have developed between Cruise and audiences. His films have been quite successful for the most part, but this summer’s critically lauded Edge of Tomorrow is a rare Cruise blockbuster that bombed in theaters. You could feel something like this coming for a while. In the last several years, we have seen Cruise star in several action movies that are broadly appealing, but hardly the best use of the star’s talents, and none of the marketing leading up to Edge of Tomorrow’s release indicated that audiences would be getting anything new. We have entered an age of potential Cruise fatigue, and it can all be traced back to the hullabaloo surrounding the release of War of the Worlds in 2005.

In short: Tom Cruise made movies like Eyes Wide Shut and Magnolia in 1999 because he felt like he could. Perhaps he makes movies like Knight and Day, Jack Reacher, and various Mission: Impossible sequels because he feels like he can no longer get weird and have audiences follow him. Even so, Cruise was able to get a few really interesting movies in before this retreat to the middle. This period also happened to coincide with one of the darker eras in the career of Steven Spielberg, and in the early 2000s the two of them joined forces for a pair of unusually bleak sci-fi blockbusters. The first is the Philip K. Dick adaptation Minority Report, a film that was critically acclaimed at the time but doesn’t seem to be on the forefront of anyone’s minds these days. That’s a shame, because this might be the best Spielberg film to come out of this era. It is smart, patient but exciting piece of entertainment that never loses sight of what it is supposed to be. It’s a dark film, to be sure, but it’s also a great deal of fun—a balance he’d struggle ever so slightly with in War of the Worlds.

As unrelentingly dark as it gets, War of the Worlds is still an immensely powerful film that winds up being more Schindler’s List than Close Encounters of the First Kind. This is true in its best moments, at least, because if War of the Worlds has a major flaw it’s that it might not be bleak enough. This is a $130 million film about the extermination of the human race, and how powerless we as a species would be to stop it. (And then, of course, it ends by revealing that the all-powerful aliens are ultimately vulnerable to certain things as well.) It commits to the notion wholeheartedly, except for when it doesn’t. The ending of the film is widely derided, and with good reason—it revives a major character who should be dead, and generally reaches for uplift which the rest of the film hasn’t earned.

There was one other problem that audiences and a handful of critics had with War of the Worlds: Tom Cruise himself. Many reviews called him “miscast” as a New Jersey dockworker who amounts to little more than your average estranged stepdad in need of redemption. It’s an odd fit, surely, but once the invasion kicks in those complaints tend to drift to the background. In fact, it was Cruise’s off-screen persona that started to turn a lot of people off. In the press tour leading up to the release of War of the Worlds, there was the infamous couch incident on The Oprah Winfrey Show as well as an interview on Today where he argued with Matt Lauer about psychiatry. He became, in the public’s eye, something of a nutcase. He was known as the crazy Scientologist who jumped on couches, and while most of the nonsense has died down since 2005, for some people these moments have poisoned Cruise to this day. 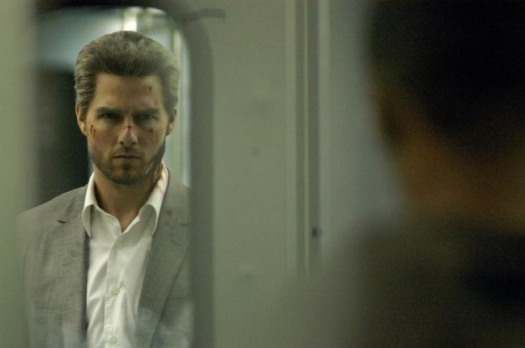 In between Minority Report and War of the Worlds, Cruise made Collateral, a Michael Mann thriller that marks the last time he took on a truly unconventional role. His character isn’t that unique, necessarily, but this is one of the only times in his career that Cruise has seemed genuinely dangerous. For such an image-conscious actor, playing a cold-blooded hitman who forces an innocent taxi driver (Jamie Foxx) to drive him around Los Angeles while he eliminates his targets might seem like an unusual risk. On the contrary: it’s pretty amazing how easily Cruise slips into this character, and it’s a shame he hasn’t done it more often. The movie itself is a minor thriller that alternates between captivating scenes of Cruise and Foxx in the car and far less captivating scenes of, well, everything else. It was also the beginning of Mann’s love of digital cinematography, and while it has a positive effect on certain skyline shots, this is a pretty ugly looking movie whenever Mann has to shoot the actors. Digital has come a long way since, but Collateral is still very early in the process.

Flaws and all, it’s hard not to look back on Collateral and yearn for a time when Cruise still took considerable risks. In the decade since, he’s devoted most of his time to pleasing the crowd at all costs. It hasn’t resulted in many terrible movies—in fact, some are excellent—but performances like this one show how Cruise’s natural charisma can be used in a more villainous fashion. He doesn’t always have to be the one taking down the bad guys. Perhaps, occasionally, he needs to be the one taken down.

With this, the Summer of Cruise will come to an end. I know it’s an abrupt conclusion, and it’s been a long time since the last installment, but I can no longer sit here and pretend that anything with “summer” in the title can keep going. Thank you all for reading the installments that I did post, and I hope to see you around these parts again shortly. I have a new idea for how I’m going to approach this blog, and perhaps starting this new version will reveal itself.

So long, and keep Cruisin’.