This week on The Screen Addict: only one film is brave enough to discuss the negative economic impact of freeing thousands of Hebrew slaves. Plus, a brief discussion of the embarrassing and alarming cancellation of Seth Rogen’s The Interview, a look back at Boogie Nights, MALICK COMIN’, and I’m not monkeying around with this week’s streaming recommendation. (Sorry.)

Exodus: Gods and Kings is a $140 million disaster without a purpose

The most miraculous thing about Ridley Scott’s Exodus: Gods and Kings is the way it takes one of the most famous stories in human history and painstakingly removes each and every detail that made it fascinating in the first place. Everyone knows the broad strokes of The Exodus story, and whenever it comes up, various images immediately and inevitably come to mind. There are the ten plagues, Moses throwing his staff upon the ground and having it take the form of a snake, his descending from Mt. Sinai with the Ten Commandments, and, of course, the parting of the Red Sea. Now imagine a cinematic retelling in which just about each one of those events is tossed aside or minimized in favor of a “grittier” version that attempts to play out these events as though they had completely natural causes, but not really. This is a prime example of a movie without a point: it has no reason to exist in the first place, and only proves to be increasingly worthless as its 150-minute running time drags on.

You know a film is bad when it makes a cast full of great performers look horrible. Christian Bale comes out relatively unscathed as one of the worst-written versions of Moses imaginable, and the fact that he’s able to produce at least a couple moments of genuine emotion shows just how great of an actor he is. As for everyone else? Yikes. Joel Edgerton’s Ramesses looks absurd and has no discernable character traits, and at one point he has to deliver this line with a straight face. John Turturro plays Pharaoh Seti I, which is as ridiculous a piece of casting as I’ve ever seen, and Sigourney Weaver has a role that requires her to cast a couple disapproving looks, recite just one or two lines of dialogue, and then disappear forever. I can’t recall seeing such an incredible ensemble get so routinely screwed over by the movie they were in.

All this makes Exodus feel like a cobbled-together collection of scenes that were deleted from another, much better retelling of the story. Literally nothing that happens is interesting on a storytelling or visual level, and everything that is interesting is executed horrifically. The characters aren’t even developed enough to be considered thin. The special effects look like garbage. The action scenes are incoherently edited. It would have been one thing for Scott to turn in a bland, by-the-numbers version of this story, but this behemoth is a baffling miscalculation. This also comes after Scott making two of his most interesting films in quite some time: the sci-fi horror film Prometheus and the Cormac McCarthy tale The Counselor. Neither of those films are wholly successful, but there’s a passion to the way they’re made that Exodus just plain doesn’t have. Plus, at least they felt unique. Exodus: Gods and Kings is nothing. It isn’t entertaining, it isn’t necessary, and it’s not even inept enough to become funny. It truly is the worst kind of film to sit through. 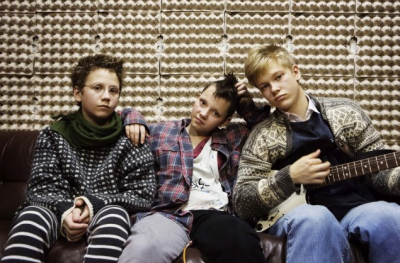 –Time to run through a few 2014 films I’ve caught up with recently. The strongest is the Swedish coming-of-age comedy We Are the Best!, about a group of preteen girls who decide to start a punk band. It is a truthful, joyous film that captures the adolescent experience in ways most films can only dream of.
–Speaking of joyous films about starting a band: the unexpectedly great God Help the Girl, the directorial debut from Belle and Sebastian’s Stuart Murdoch. Featuring Emily Browning in a career-best performance, it follows her character Eve as she recovers from an eating disorder, meets a couple friends, and gets a band going. It’s a shaggy film, but infectious nonetheless.
–I think I’ve come to the following conclusion on Adam Wingard movies: they are very good at what they do, but they aren’t quite for me. His latest, The Guest, features an incredible performance by Dan Stevens in the lead, and the first half is a mostly fascinating thriller with a healthy dose of mystery. Then the rather sadistic bloodshed starts, and I quickly lost interest. I don’t take particular joy in undiscriminating violence in films, but Wingard’s seem to revel in it. But for those who enjoy his formula: more power to you. 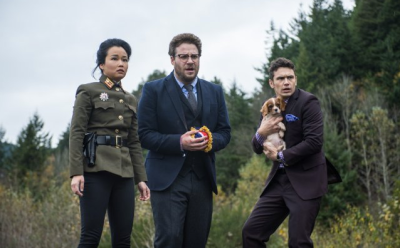 In the last 24 hours, we have seen a truly dispiriting story play out. It’s gone on even longer if you go back to the start of the Sony hack, which saw documents and personal information stolen. Instead of ignoring this information and letting the threat disappear, many blogs and websites reported it, and publicly talked about the “embarrassing” info that was being discovered. (One of the worst is Gawker’s blog Defamer, which has always been horrible, but has gone out of its way to prove it lately.) Through this, they gave the hackers a mouthpiece, and so when they finally threatened to attack any theaters that showed the new Seth Rogen comedy The Interview—which is about a plot to assassinate North Korean leader Kim Jong-un—everybody took it seriously and panicked. Sony gave movie theaters the option of pulling the film. They did so, and now Sony has officially canceled the film’s December 25th release and announced they have no plans to make it publicly available.

It has been revealed that the source of the hack was almost certainly North Korea itself, which opens a whole other can of worms, but by everyone immediately folding and hiding the film away, a clear message has been sent: the hackers can win. This is a dangerous precedent to set, and it’s hard to see any studios getting behind a slightly “dangerous” film ever again. If a group with hacking capabilities sees potential danger in a piece of art, it is entirely within their power to stop it. North Korea wanted the movie buried, they formulated a plan, and succeeded. The ripple effects have already been felt: Steve Carell’s forthcoming film about an American in North Korea has been scrapped just prior to production, and who knows how many more will be effected?

This has the potential to go in the other direction, though. There is now more interest around The Interview then there ever was before, and in the typically crowded Christmas movie slate it was likely to get lost in the shuffle. It would seem to make all the sense in the world to get the film out there some way, some how, but based on Sony’s response, it seems unlikely this will happen immediately. I would be shocked if we didn’t see it wind up online or on demand at some point, and I do hope it happens sooner rather than later. The “bad guys” have already won this battle. To continue down this road would be the latest massive, cowardly mistake in a series of them.

Last week, ahead of the limited release of Inherent Vice, Grantland published an oral history of Boogie Nights, Paul Thomas Anderson’s 1997 breakthrough feature. As such, I thought it might be a good idea to mention it here in an attempt to convince any holdouts to get around to it. This is a film that clearly owes a lot to Scorsese and Altman—as most early Anderson films do—but it’s an exhilarating experience about a truly unique time and place in Los Angeles history. At the center is Mark Wahlberg as Dirk Diggler, a young man who is offered a chance in the pornography industry and is immediately sucked into its magnetic field. From there, we watch as he is brought into the most untraditional of untraditional families, and how everyone attempts to adapt to a changing adult entertainment landscape. It’s the clearly the work of a young, arrogant, energetic director, but unlike Anderson’s next film Magnolia, this exuberance never gets the best of him. In Boogie Nights, his eye is always on the ball.

When last we heard from Terrence Malick, he had made To the Wonder, the first of his films to be not just critically dismissed, but outright ignored. This is especially odd considering his previous film was the massive, ambitious, critically-adored The Tree of Life. He hopes to reverse this with Knight of Cups, set to come out next year. As with all his films, nobody really will know what it’s about until they actually see it, and even then it might not be that helpful. From this trailer, it seems like a film that might explore the world of Hollywood excess through the eyes of Christian Bale. Or something. It definitely seems in line with his recent style, and I will gladly show up to anything with his name on it. Even when it doesn’t quite work, as in To the Wonder, it’s still unlike anything else out there.

It’s not often that one of the most critically-acclaimed blockbusters of the year starts to fade from memory just a few months later, but that seems to be what happened to Dawn of the Planet of the Apes, the sequel to the equally-respected Rise of the Planet of the Apes. I wasn’t as big a fan of that one as most, but Dawn is such a surprisingly compelling film that I would wholeheartedly recommend it for anyone looking to catch up on the major films of the year. As you might expect, the human drama is far less interesting than that of the apes, which takes the technology established by Andy Serkis & co. from the first movie and brings it to a whole other level. Plus, it has a monkey riding a horse through fire while wielding a machine gun. That alone is worth your On Demand dollars.

One thought on “Let My People D’oh”