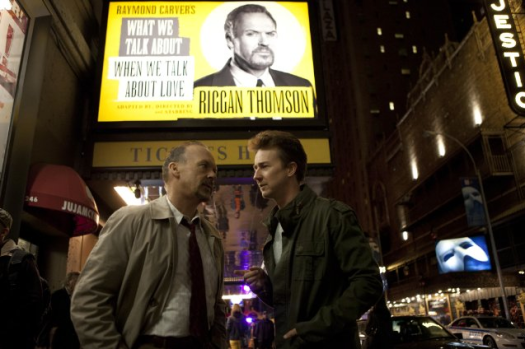 The Oscars are, of course, incredibly predictable. They have been for a long time, and it’s hard to see that changing in the foreseeable future. There are too many guild awards, too many prognosticators, and the months (months!) leading up to the ceremony have become a deafening buzz machine full of stupid, desperate campaigning and even stupider smear campaigns. As Oscar season rolls on, various movies are placed on a pedestal only to be violently torn down. Selma, Boyhood and even American Sniper had moments on that pedestal, and once all the mud-slinging is done, what are we left with? Birdman, another film that ostensibly pokes fun at show business, but does so politely for two hours before coming to the conclusion that it’s actually awesome and important.

This seems to be a trend for the Oscars lately, which in the past few years has honored films such as The Artist and Argo with its top prize. Birdman is admittedly a bit weirder than those two, but it goes about its weirdness in a pandering way that must be music to the ears of the Academy’s predominantly old, white voters. Long stretches of the movie are spent taking down everything from social media to critics without ever seeming to understand how any of it works. It’s a film full of assumptions presented as fact, and it’s all done in a fashion that winds up being more self-aggrandizing than self-deprecating. Technically, it’s impressive, and Emmanuel Lubezki’s victory for Best Cinematography was the most deserved of its victories, gimmicky as it may occasionally be. But the story it’s telling is a lot of simplistic nonsense, and the fact that it came away winning Best Original Screenplay over the likes of Boyhood, The Grand Budapest Hotel and Nightcrawler is especially absurd.

This is nothing new, of course, since the Oscars have a long history of making a series of questionable decisions in between occasional flashes of intelligence. Just last year, the phenomenal 12 Years a Slave took the top prize over a field that didn’t have one out-and-out stinker in it. I also stand by Argo as a mostly terrific movie, as much as it falls right in to the Academy’s wheelhouse. But then you have the love-fests for The Artist and Birdman, which are silly to the point of being ignorant. (Even though I hear ignorance has its unexpected virtues.) Admittedly, the Best Picture field in 2011 wasn’t particularly strong, even though Terrence Malick’s The Tree of Life is in there. But this year, the Academy had several opportunities to embrace movies that were genuinely daring, innovative or profound, rather than a movie that exerts so much effort into making you think it’s daring, innovative and profound. Films like Boyhood and Selma were right there for them to embrace, but they walked right by them in favor of Alejandro González Iñárritu’s ode to actors, creators and the Important Work they do.

I’d like to mention that I’m not actually as angry about all this as I may sound. Again, this was all too predictable to be genuinely infuriating, and ultimately I’m less angry at Birdman than I am at a voting group that chooses to single it out as the most important piece of filmmaking that was released in 2014. Does it matter in the long term? Of course not. Year after year, the Oscars are built up as the most meaningful night of the cinematic calendar, but ultimately, whoever wins and loses becomes little more than a footnote. Boyhood not winning Best Picture will have zero impact on its long-term legacy. If anything, it might cause more fans to rally behind it.

Much like the films, the ceremony itself wound up being more of the same. After a rousing opening number, Neil Patrick Harris was left to enthusiastically deliver lame jokes to minimal response, including a running gag about a box of “predictions” that paid off precisely as poorly as everyone anticipated. People like to pile on the hosts for their duds, but I’m more inclined to blame the writers, who have done nothing to help their presenters in many years. Harris, like many a host before him, was often left swinging in the wind. Remember the James Franco/Anne Hathaway disaster from a few years back? As poorly as that went, the material they were trying to sell was equally weak. With a few exceptions, this show does a really poor job of playing to the strengths of its stars.

The best moment of the ceremony came in the middle of the musical number, when Jack Black went onstage and angrily sang about the sad state of mainstream Hollywood. Of all the jokes throughout the night, it was the only moment that has any real edge, so of course immediately after it ended they went back to the self-important business at hand. Like Birdman, and other recent showbiz-centric Oscar winners, it offers a microcosm of how the industry views itself in moments like this. This is a group that doesn’t mind gently making fun of itself, so long as it’s tooting its own horn at the same time.

One thought on “The Same Old Song: An Oscar Postmortem”