This week on The Screen Addict: Furious 7 goes big, Scientology goes down, I recommend a classic from the ’70s, a Sundance hit nears its release, and Don Hertzfeldt shows you the World of Tomorrow.

Furious 7 lacks the magic of previous installments, but is still a fine example of what the series does well

Whether you are a fan or not, there may be no modern blockbuster franchise as fascinating as the Fast & Furious films. What began with a relatively low-key thriller about street racers has become one of the most gloriously over-the-top box office behemoths going, and much of this creative and commercial success can be attributed to director Justin Lin. He took over the series with the divisive third installment Tokyo Drift, and stayed around to direct the next three as well. The peak of this stretch is undoubtedly Fast Five, at which point Lin turned the series into something else entirely—something bigger, louder, dumber, and achingly sincere. Most amazingly of all: it worked. The modern Fast & Furious films have a tone like no other franchise out there, taking everything a big-budget action movie is supposed to do and presenting it in the biggest way possible, but unlike certain Michael Bay-directed films, they never seem cynical about it. They silliness is presented in an unusually inclusive fashion, and the result is often joyous.

With Furious 7, the series gets its first new director since Tokyo Drift in James Wan, director of Saw, Insidious and The Conjuring. It’s an odd choice, considering the Fast & Furious series isn’t exactly known for its haunted houses, but from a stylistic standpoint he picks up right where Lin left off. He proves himself to be a fine director of action, and whenever Furious 7 hits the gas (sorry) that is when it’s most effective. However, this is also the first time you can see the series straining to take its scale to the next level. These movies are completely bonkers from a plot standpoint and always have been, but recent installments have found ways to take the big setpieces and (somewhat) gracefully weave them in to the larger story. Here, it all seems a bit perfunctory—as though the filmmakers started with a few huge, insane stunt ideas and then worked backwards. I’m sure that’s always been the case, but in Furious 7, the seams are more visible than in the past.

That extends to the character-focused scenes, which don’t quite have the same energy that Lin brought to his films. It’s still fun to hang out with these characters—whenever they all share the screen at once it becomes a wonderful charisma contest—but there’s a stitched-together feeling to these proceedings that doesn’t quite solve itself. Part of the problem may be the decision to sideline Dwayne Johnson’s character for most of the movie, since his genuinely dazzling performances are part of what made the last two films such a blast. However, when he bursts back onto the scene during the climax, he is sure to make it worth the wait. As frustrating as Furious 7 may be for long stretches, it’s easy to put that all behind you once it decides to stop fooling around and break out the big guns. Literally. The villains, here played by Jason Statham and Djimon Hounsou, almost don’t matter. We just want to see our old pals drive fast cars and cause widespread destruction to a populated urban area.

The best scene in the film is almost certainly the last one, in which the Fast & Furious series bids farewell to the late Paul Walker. It’s a touching, on-the-nose, and surprisingly effective sequence that encapsulates one quality that has helped to make this franchise so indestructible. As much as Vin Diesel’s protagonist talks about the importance of “family,” and as silly as it often sounds, it never comes off as phony. The films have completely bought into this sentiment, and when Walker’s character gets an unapologetically maudlin send-off, it feels completely in character with how this series operates. It also speaks to that inclusiveness I talked about—these films completely understand the attachment audiences have to these characters, and Furious 7 isn’t afraid of breaking the fourth wall to make them feel like part of the team. Very few other franchises could pull off what this film does in its final moments and make it feel genuine. Part of the joy of the Fast & Furious films, in both the good and bad installments, is that they don’t have a contemptuous bone in their body.

–Alex Gibney’s Going Clear: Scientology and the Prison of Belief suffers quite a bit when you compare it to Lawrence Wright’s much more thorough book of the same name, but for those interested in learning more about Scientology and its bonkers history, it’s a fascinating watch. It’s more of a primer than a comprehensive take-down, but it hits most of the big points.

–Noah Baumbach follows up the terrific Frances Ha with While We’re Young, featuring Ben Stiller and Naomi Watts as a middle-aged couple who befriend and develop a complicated relationship with two 25-year-olds (Adam Driver and Amanda Seyfried). It has almost everything going for it, including a great cast doing great work, but down the stretch it seems to realize that it has nowhere else to go.

—Danny Collins is worth seeing for Al Pacino alone, who gives his best performance in years, if not decades. Outside of him, Dan Fogelman’s film is a minor, wonderful thing that doesn’t aim high, but also never fumbles the ball. It’s amazing how few films even accomplish this level of low-key bliss.

–From New Zealand comes What We Do in the Shadows, an often hilarious vampire comedy in the mockumentary style by Taika Waititi and Jemaine Clement. Not all of it sticks, but it creates a wonderfully realized little world and throws a barrage of jokes at the audience. Definitely worth a look once it hits streaming. 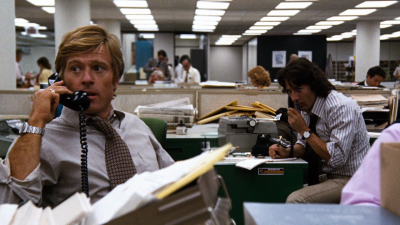 I’ve long been a sucker for slow-burn investigative thrillers, and All The President’s Men just might be the king of them all. Robert Redford and Dustin Hoffman play Bob Woodword and Carl Bernstein, respectively, and the film follows their attempts to get to the bottom of the Watergate story for The Washington Post. It’s often an unsatisfying movie, but deliberately so, as it follows the two protagonists through all the frustrations of reporting a story nobody wants them to be investigating. With this last viewing, I was especially blown away by the direction of Alan J. Pakula and the cinematography of Gordon Willis. They perfectly capture the artificially-lit, smoke-filled environment of a ’70s newsroom, and much of the action therein is filmed in long (but not flashy) takes. In the hands of lesser filmmakers, this script could have been interminable, but Pakula and Willis make it enthralling.

Of all the films to premiere at this year’s Sundance, Me And Earl And The Dying Girl has been marked as one of the potential breakout hits. With only a few exceptions, Alfonso Gomez-Rejon’s film was met with a rapturous reception, despite the fact that its premise sounds… troublesome. Basically, two friends who like to make intentionally bad remakes of movies for the heck of it meet a girl who has cancer, and then they decide to make a movie for her. It has all the makings of a phony Sundance creation, and it was probably inevitable that the trailer was going to highlight some of those qualities. (Trailers deal in broad strokes, after all.) However, there are several moments where glimpses of the film’s quality are able to break through. For one, it looks great, and there seems to be a general wit to the proceedings that will keep it from feeling too precious. I was going to see this anyway, of course. But this trailer provides an interesting glimpse of what I’ll be in for.

Don Hertzfeldt has become a fascinating figure in animation in recent years. He broke through with his short film Rejected in 2000, and since then the scope and ambition of his projects has slowly expanded. This hit a peak recently with the acclaimed film It’s Such a Beautiful Day in 2012, and his latest short World of Tomorrow, now available on Vimeo, is something quite special. Using his signature stick figure style, a much grander agenda starts to reveal itself over the course of 16 heartbreaking minutes. I don’t want to say too much considering it’s so short, but it’s a quarter-of-an-hour you won’t soon regret.